This is not about a new idea in the sense of potential invention or patent. But a new and interesting finding.

The Wikipedia data is not complete; it doesn't even have the day for Australia, among others. Using a more complete data set, from OfficeHolidays.com, I get a slightly different result:

Let's assume that the national day is when the country initially announced independence. As you can see, most countries announced their independence in July, August and September. With more than 200 data points, this cannot be completely accidental. There should be a good reason for it.

One hypothesis is that an independence war is more active in warm weather. In winter, the harsh cold weather slows down the progress, or rather, slows down the offence more than the defence, as the relatively inactive defending side is not impacted as much by external factors as the active attacking side is. There's a small surge in February. It may be due to the fact that at the end and beginning of a year, people are more or less in a holiday mood. After that, the independence activity resumes, with a burst of pent-up energy.

To test the hypothesis that low temperature in winter reduces the chance of independence, or rather, reduces the success rate of offense more than reduces the rate of defense, I come up with one idea to test it: Plot the national days according to the geographic latitude of the countries. If a country is in the southern hemisphere, their winter is actually summer in the north. If the hypothesis is correct, we should see a reverse trend for those countries: their independence days will largely concentrate in (northern) winter months. In addition, the countries near the equator will have less correlation than those in higher latitude, because the seasonale change at lower latitudes is not as obvious.

There's no "general" or "average" latitude of a country available. So I use the latitude of the capital of the country as an approximation, a method justified by the fact that a capital is usually one of the most contended cities in an independence war. The data thus combined is in Appendix. A plot of the data is Fig.2, where the y-aixs is the latitude for the capitals of the countries. 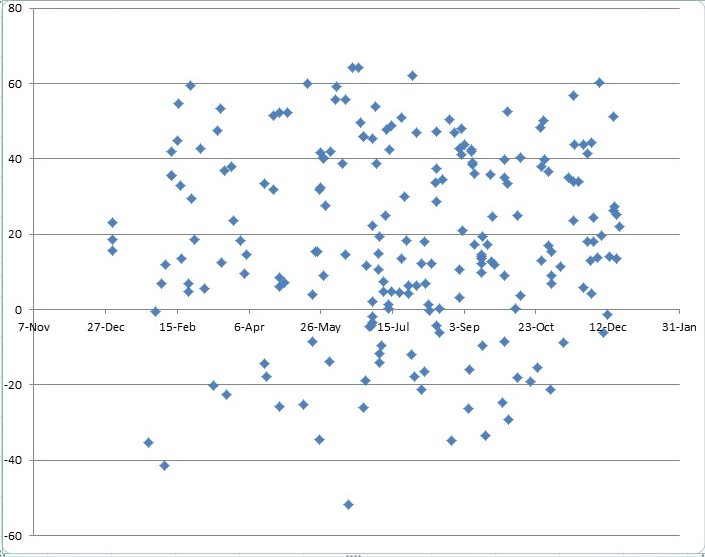 As we can see, there's no clear correlation between latitude and independence days. Both northern and southern hemisphere countries have more independence days in summer and early fall. There must be some factors that contribute to the seasonal distribution of national or independence days of the world countries. This research will continue and preliminary data and results will be given on this web page.

NationalDayLatitudeData.txt
National Days are from OfficeHolidays, and Capital latitude data are from Wikipedia. The data in the datafile is tab-delimited and can be copied into Excel for analysis and plotting.

Originally posted to my web site.

Catch a fly the clean way

Flies are hard to catch. Unlike mosquitoes, way before an object of some flat surface (such as your palm) reach a fly, it senses the incoming air flow and takes off. I'll tell you the easiest and yet simplest way to catch a fly. Find a deep and small plastic bag. The ones you use at a grocery store to buy fruits and vegetables are perfect. (Not the big ones you get at the checkout counter.) Wait till the fly lands somewhere, on a surface (horizontal or vertical) or on or in a corner. It doesn't matter. Open the opening end of the bag and hold the opening in one hand. Hold the bottom end of the bag in the other. Slowly move the opening of the bag toward the fly until it jumps up or the rim of the opening touches the surface of its landing. Either way, the fly is in the bag and you've caught it live and clean, leaving no mess on the surface.
at June 22, 2015 No comments:

Speed bump without a hump

Many neighborhoods have speed bumps or humps to slow down traffic. While it works as expected, vehicles going through these bumps will suffer more wear and tear on the suspension system, not to mention the reduced comfort to the people in the vehicles. More seriously, the up-and-down movement may cause additional injury to the patient in an ambulance going across.

I think we should build these speed reducing facility so that the vehicle must slow down but does not need to go up and down. One way to solve the problem is to create narrow slots along the street so the driver must slow down and align the wheels with the slots, to avoid bumping onto the raised slots. (Bumping onto them won't cause damage, just reduced comfort.) The slots can also be made slightly slanting toward one side of the street, forcing the vehicle to turn a little to avoid the raised humps of the slots. In either case, the wheels of the vehicle are always on the same level as before. In the long run, the suspension system will have a longer lifetime and passenger comfort is always preserved.


Nowadays, the Internet service providers, AT&T or Comcase or any other, and utility companies entice new customers by offering a significantly lower price for the first few months or the first year. After that, it goes up to the regular price. Obviously this pricing model makes newcomers happy and old customers disgruntle. Because every company in the same competitive field does the same, no company wants to drop the new customer incentive plan and maintain a constant price plan. But this strategy goes against the common business sense that loyal customers should be treasured more than the new ones.

I think a better pricing model is a combinatory one that both attracts new customers and accomodates old loyal customers. The way to implement this ideal is to keep the initial price low, for 6 months or a little longer, bring up the price to the regular one, and very importantly, from this point on, continue to lower the price incrementally, at a rate of, say, 5% lower than in the previous month, until it eventually comes down to a level comfortable with both the company and the customer. Wickedly cunning customers can still choose to switch away to another company at the end of the 6-month initial discount period. But many customers probably don't bother to make any change, and will enjoy the loyalty appreciation offered by the company.

If you don't want to buy or temporarily don't have a cell phone dashboard mount or cradle, you can use a rubber band to pin the cell...